The Clifford attractor, also known as the fractal dream attractor, is the system of equations:

where a, b, c, and d are constants of choice. It is an attractor because at given values of a, b, c, and d, any starting point $(x_0, y_0)$ will wind up in the same pattern. See Vedran Sekara’s post for a good summary on how to use Python to make a plot of the Clifford attractor. Code for this page may be found here. 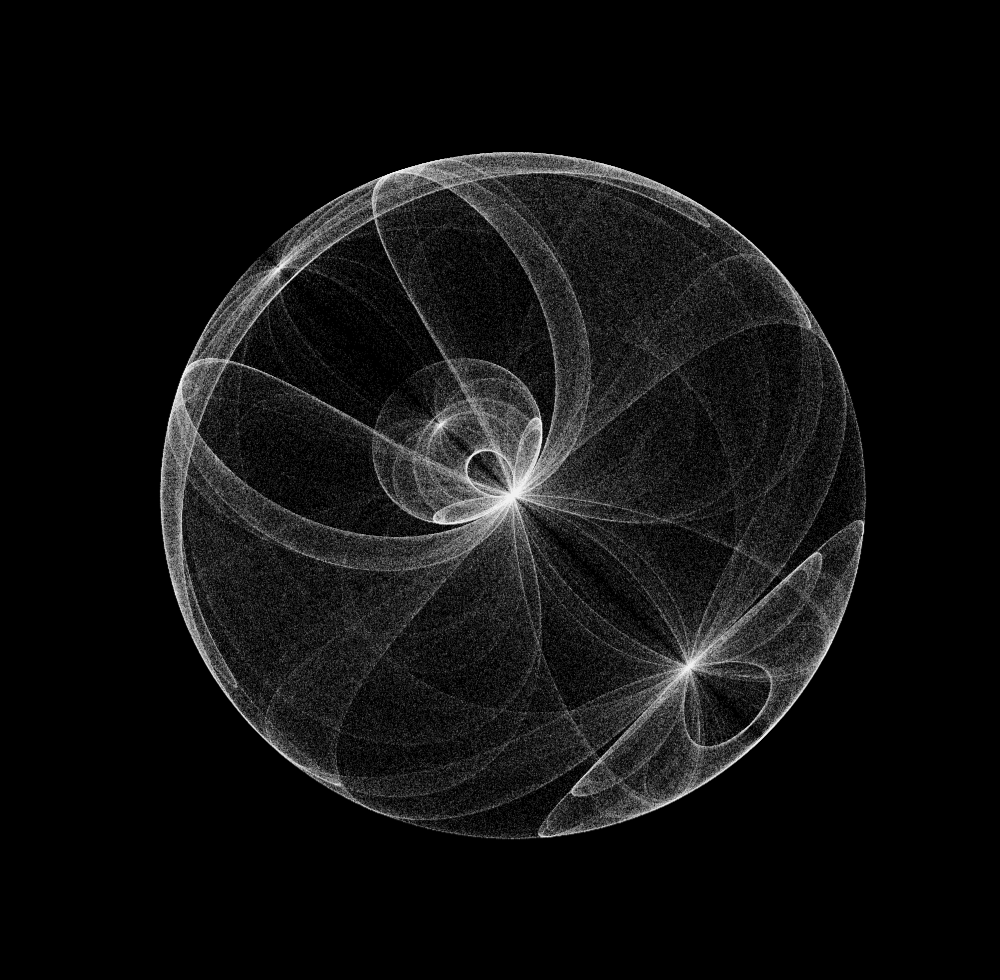 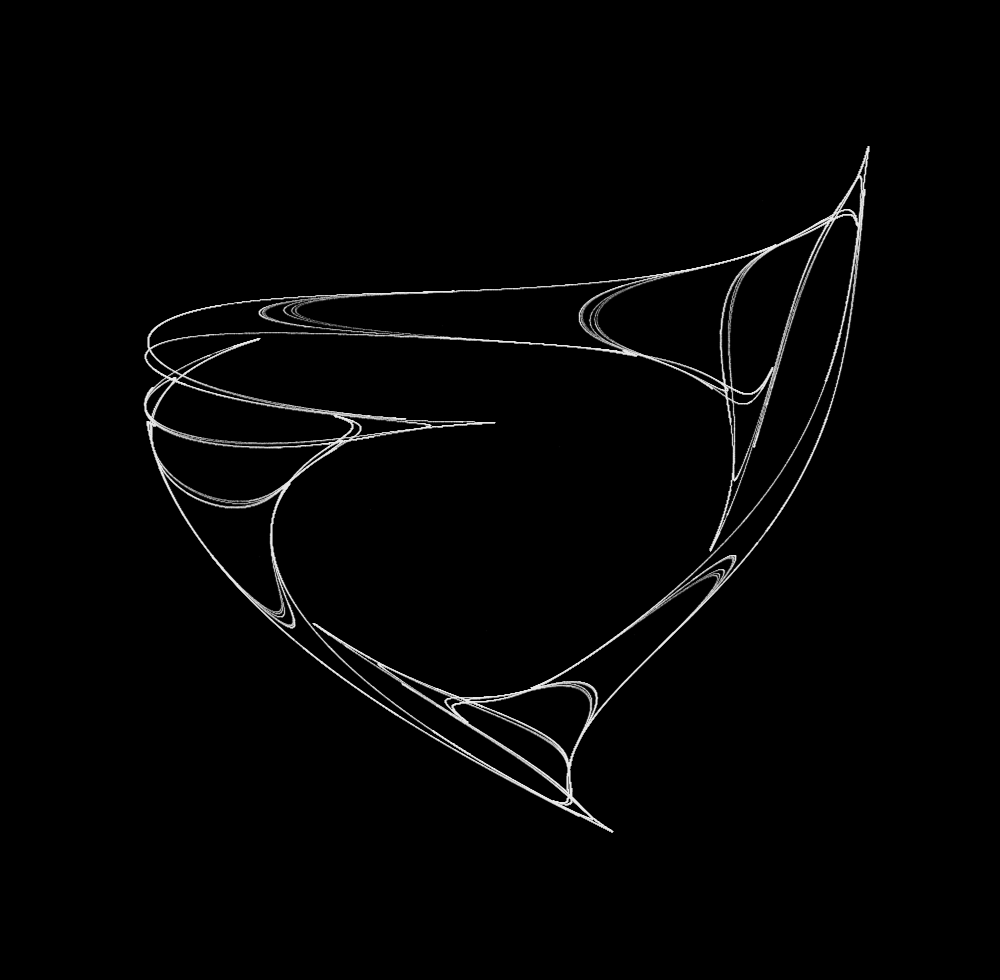 A wide array of shapes may be made by changing the constants, and the code to do this is here Try experimenting with different constants!

In what way is this a fractal? Let’s zoom in on the lower right side: In the central part that looks like Saturn’s rings, there appear to be 6 lines. 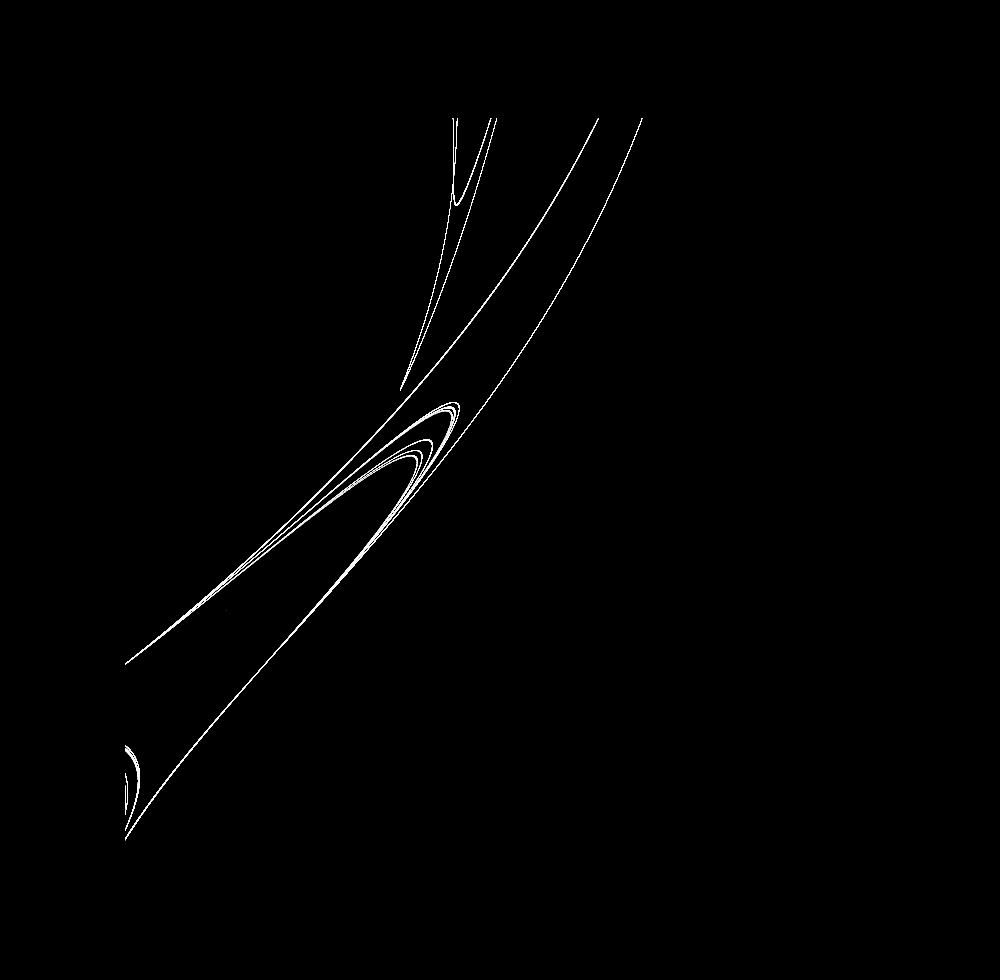 At a smaller scale, however, there are more visible, around 10 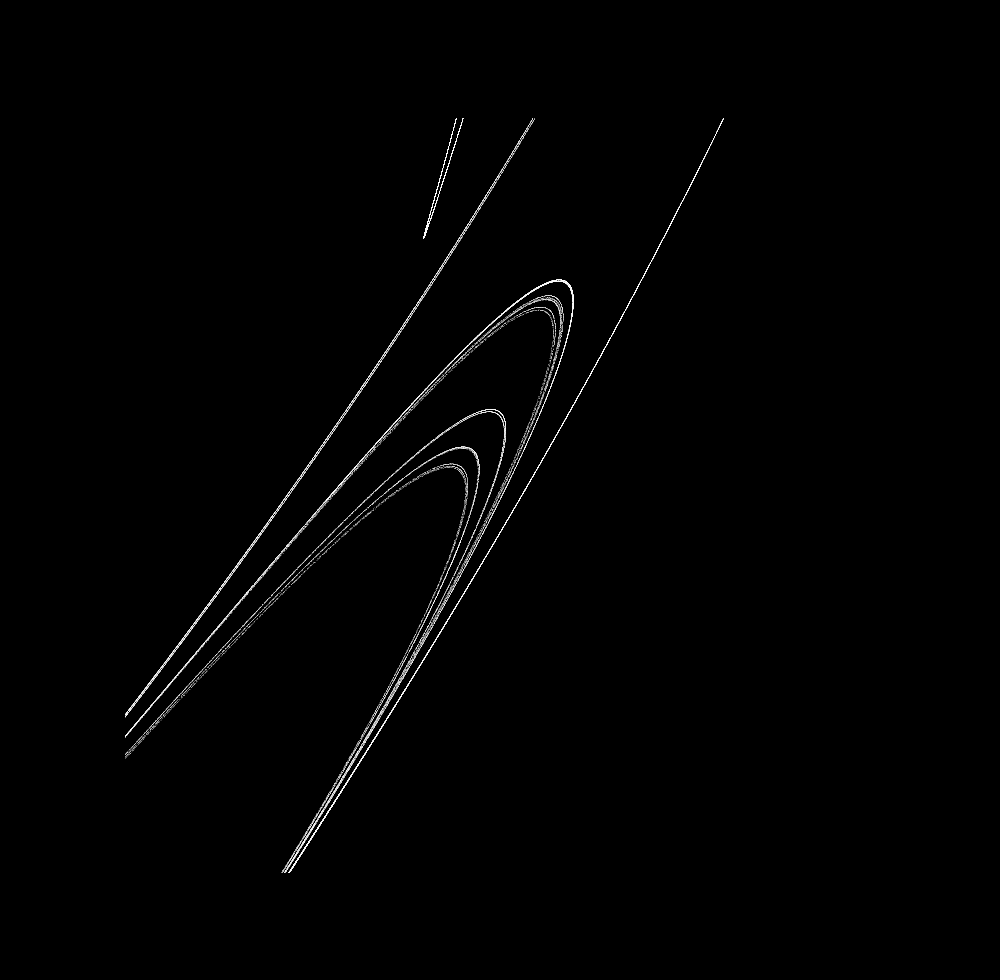 And at a smaller scale, still more, 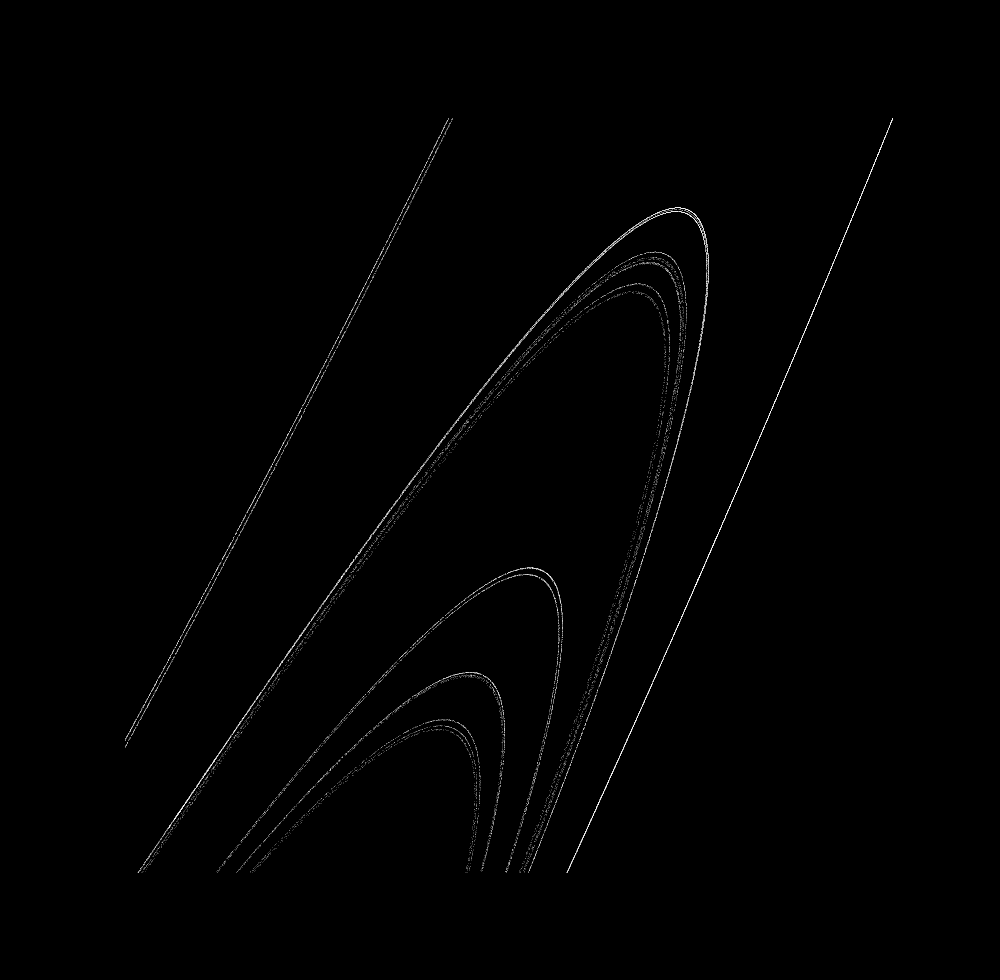 and more at a smaller scale, 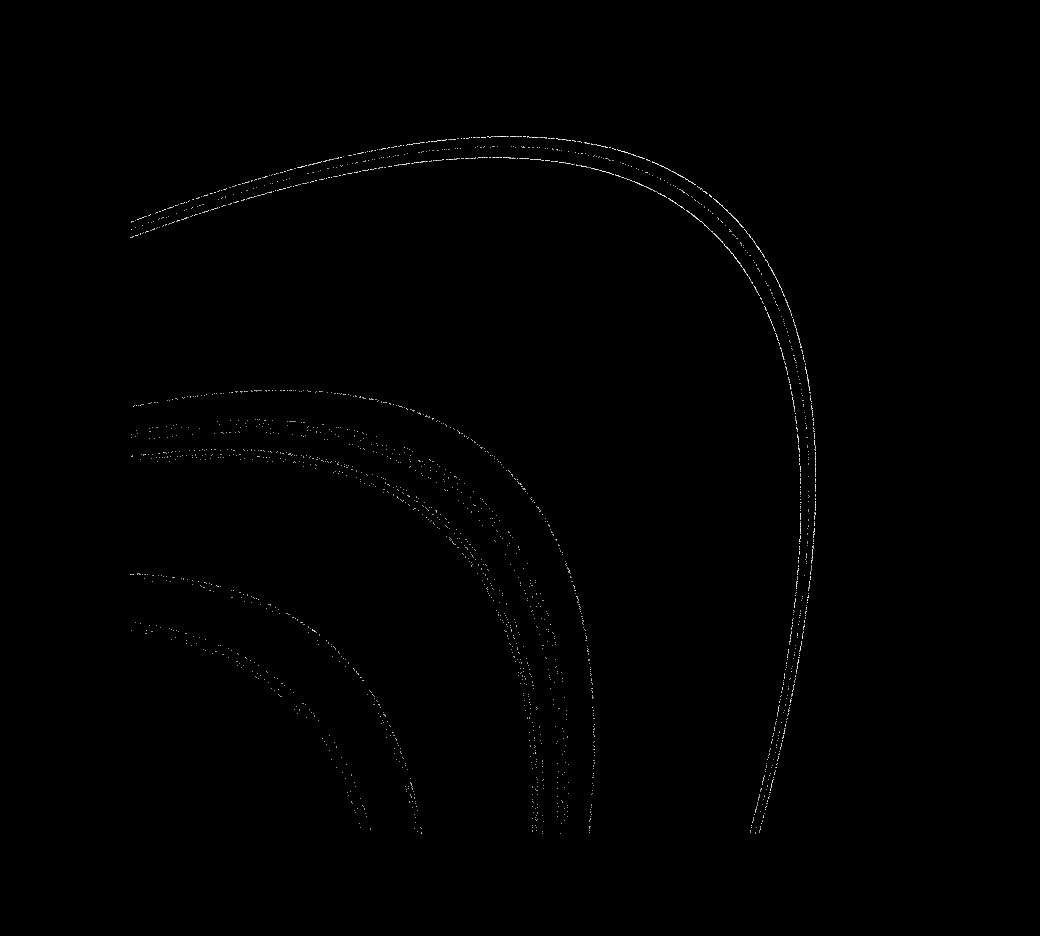 Fractals are objects that appear similar at different scale, or more precisely objects that have a scaling dimension greater than their topological dimension. In this case, we can idealize the topological dimension to be $d=1$, as after many iterations curves are formed. But upon an increase in scale, more and more lines within one boundary are visible: there are an infinite number of idealized curves that form a Cantor set, which has a scaling dimension greater than 0. For more on what fractals are and why they are important, see this page. 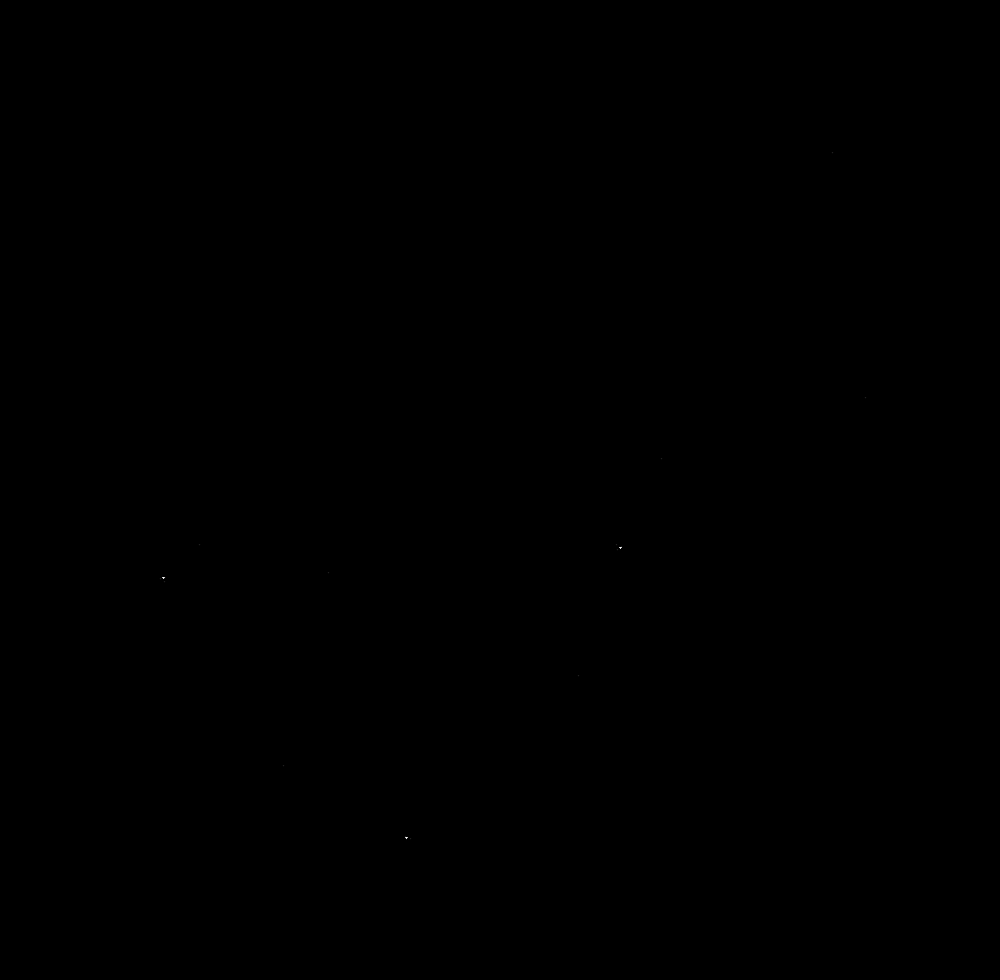 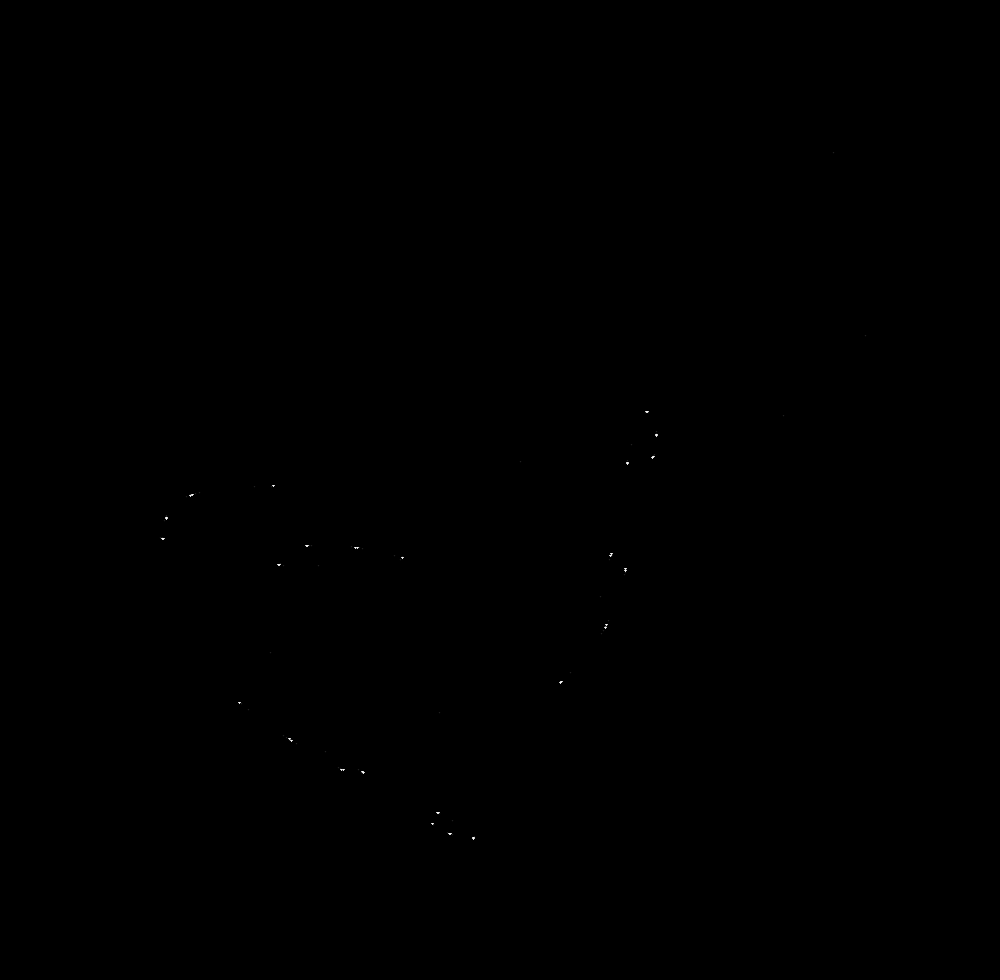 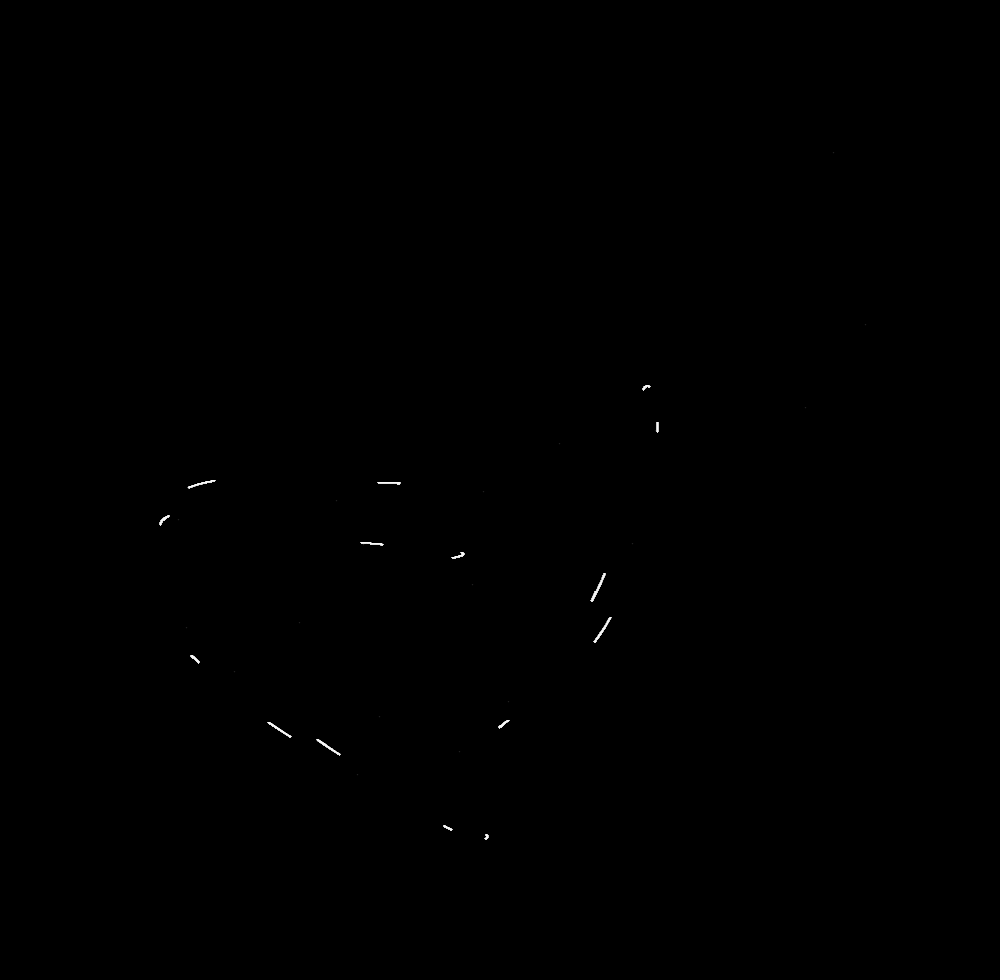 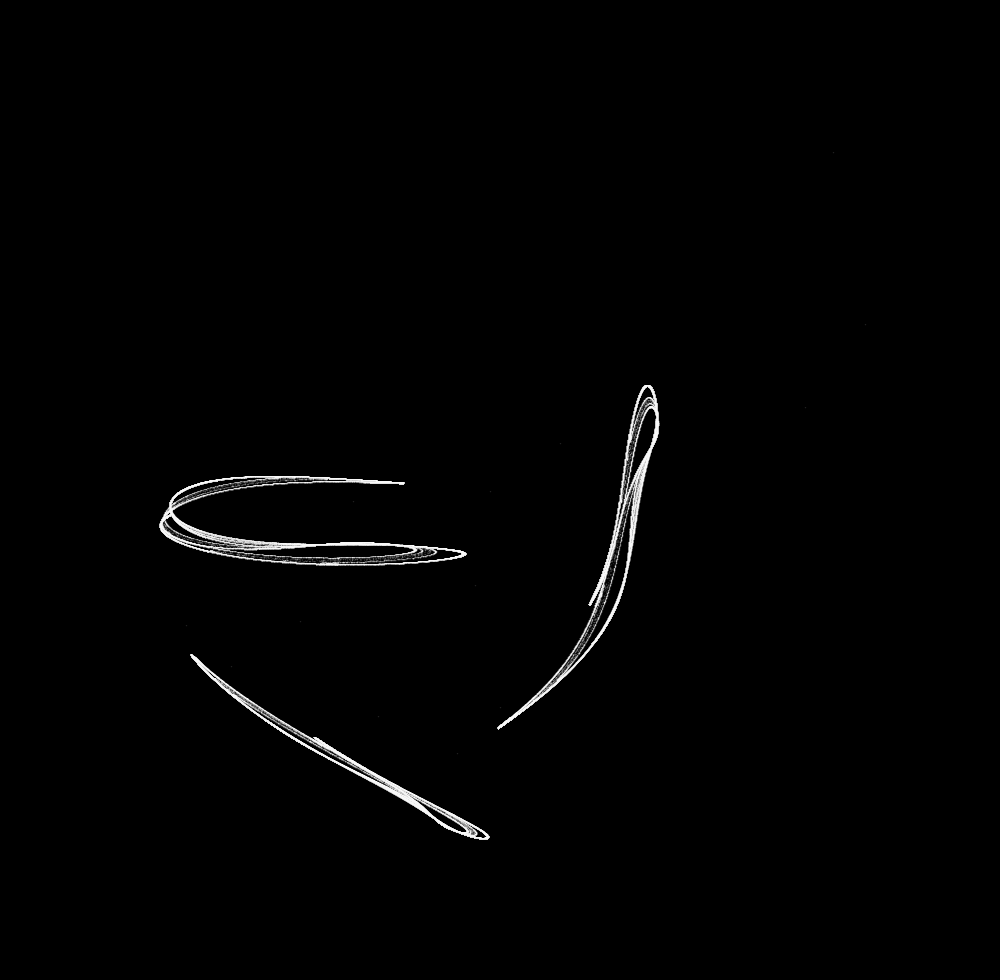 This is not peculiar to the Clifford attractor: any one-to-one mapping from $1$ to $2$ dimensions must be discontinuous. And as there is no function that will map a point to a line (because any such function would have to map a point to many points, and would therefore not be a function), a vacuous observation is that there is no continuous mapping from 0 to 1 dimensions. 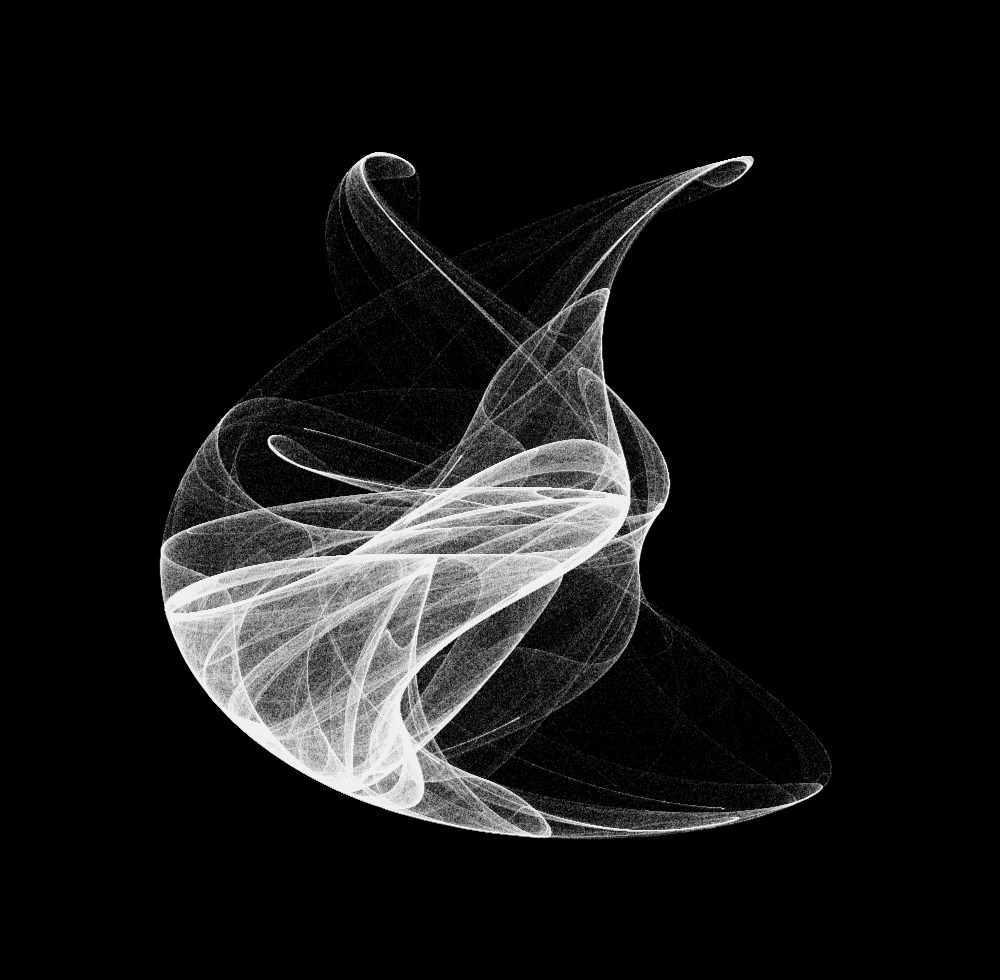 Say you want to model an ordinary differential equation:

such that the change in the variable $x$ over time $t$ is defined by a function $f(x)$, starting at an initial point:

If the equation is nonlinear, chances are that there is no analytic solution. What is one to do? Do an approximation! Perhaps the simplest way of doing this is by using discrete approximations to estimate where a point will go given its current position and its derivative. This is known as Euler’s method, and can be expressed as follows:

where $\cfrac{dx_{current}}{dt}$ signifies the differential equation evaluated at the current value of x.

With smaller and smaller values of $\Delta t$, the approximation becomes better and better but more and more computations are required for the same desired time interval:

For a two dimensional equation, the approximations can be made in each dimension:

To make these calculations and plot the results in python, the wonderful numpy and matplotlib libraries are used and we define the Clifford attractor function with constants $a=-1.4, \; b=1.7, \; c=1, \; d=0.7$:

Setting up the number of iterations and the time step size, we then initialize the numpy array with 0s and add a starting $(x_0, y_0)$ coordinate:

For computing (2), let’s loop over the clifford function, adding in each next computed value to the numpy array.

The next step is to calculate the size and direction of each vector at the designated grid points according to the clifford map, and assign each value a color.

Now let’s plot the graph, adding both vector plot and differential iterations to the same plot. 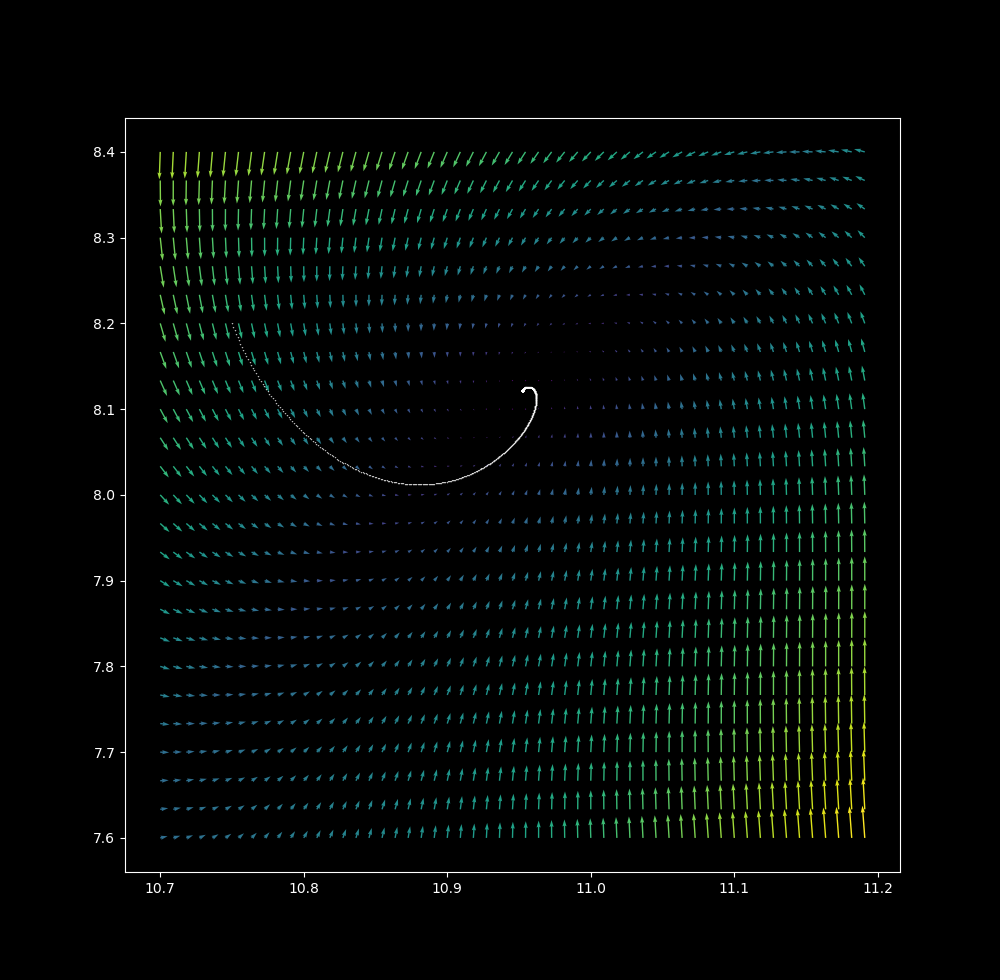 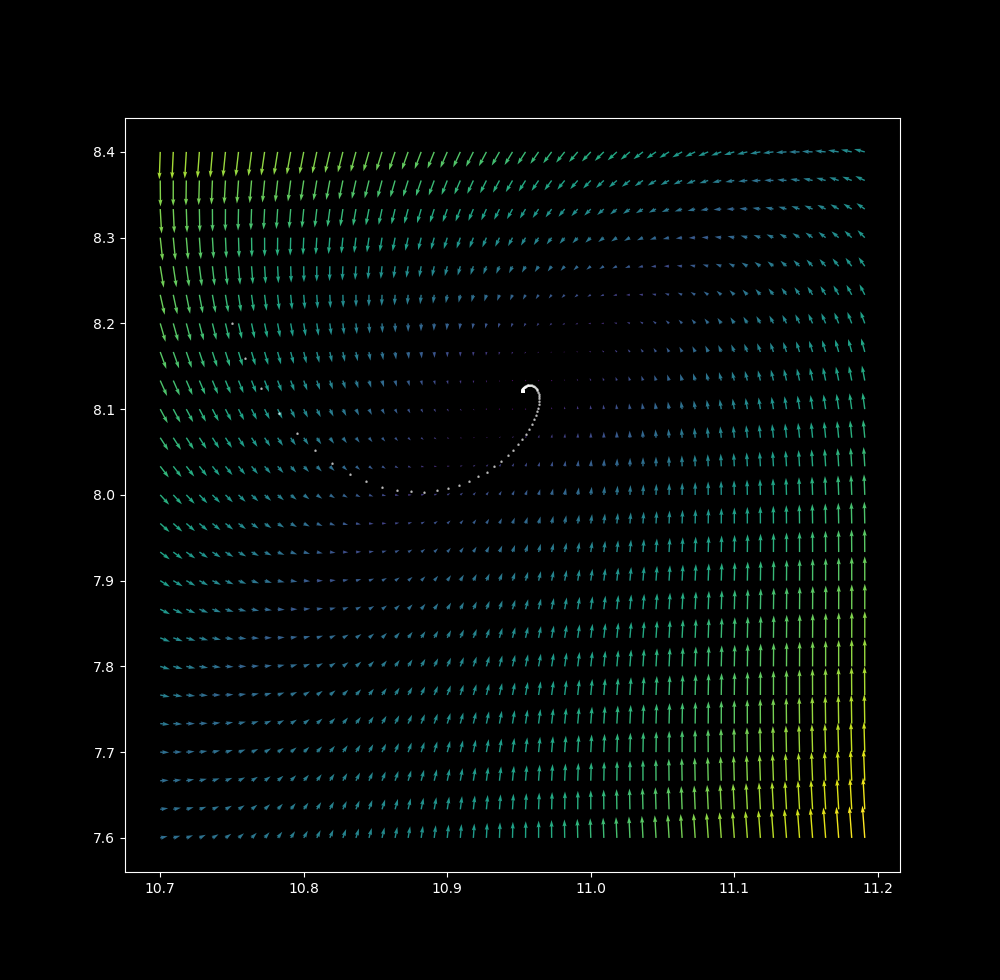 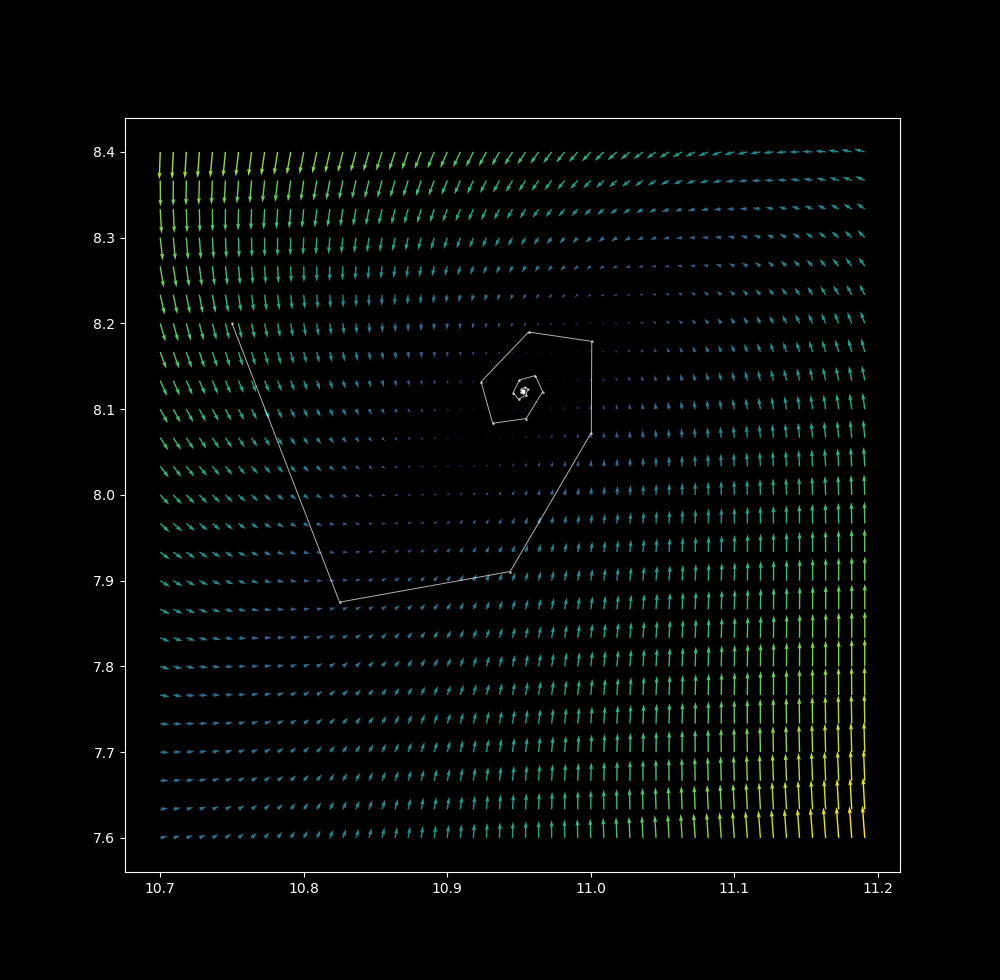 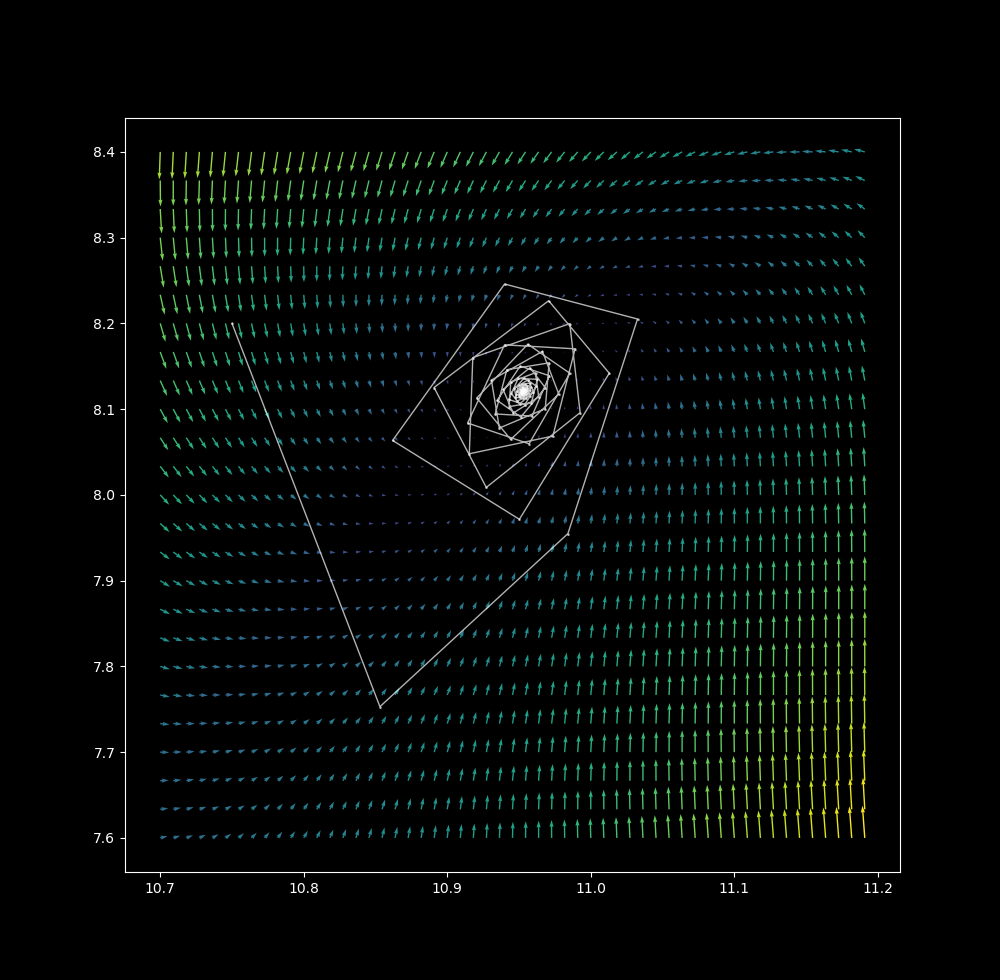 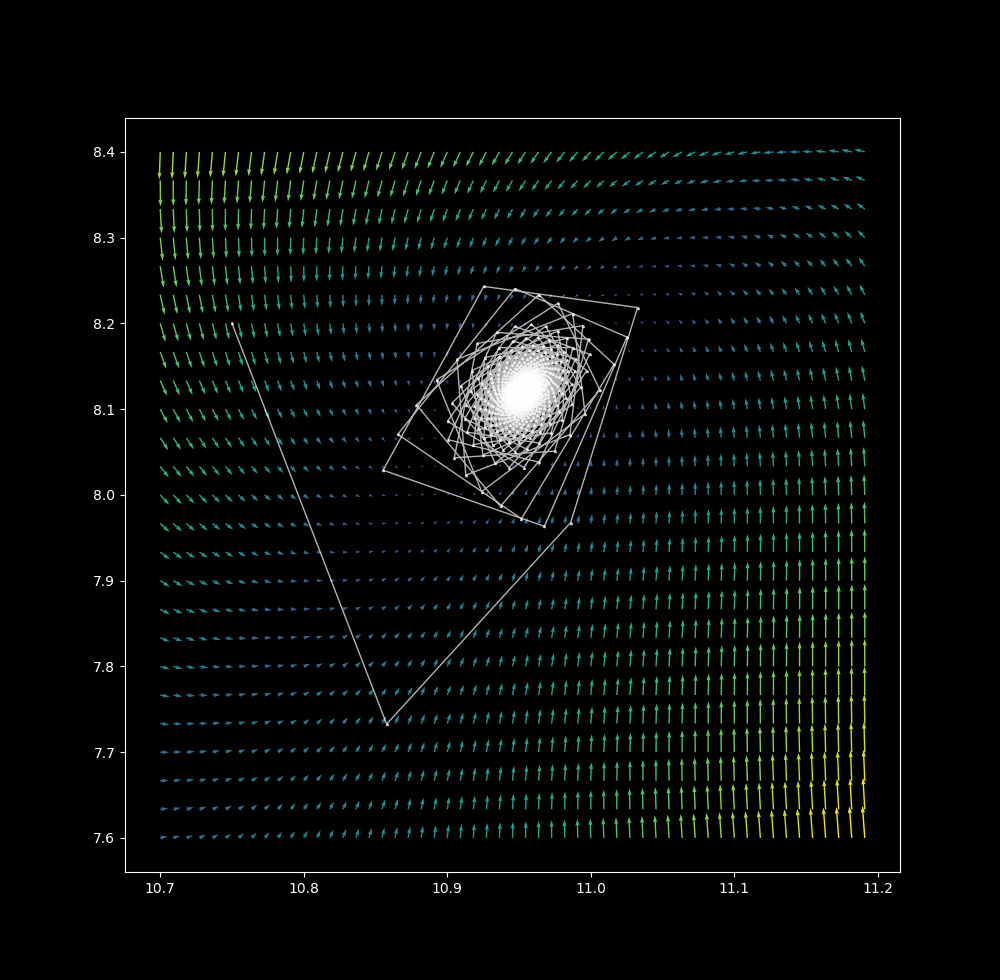 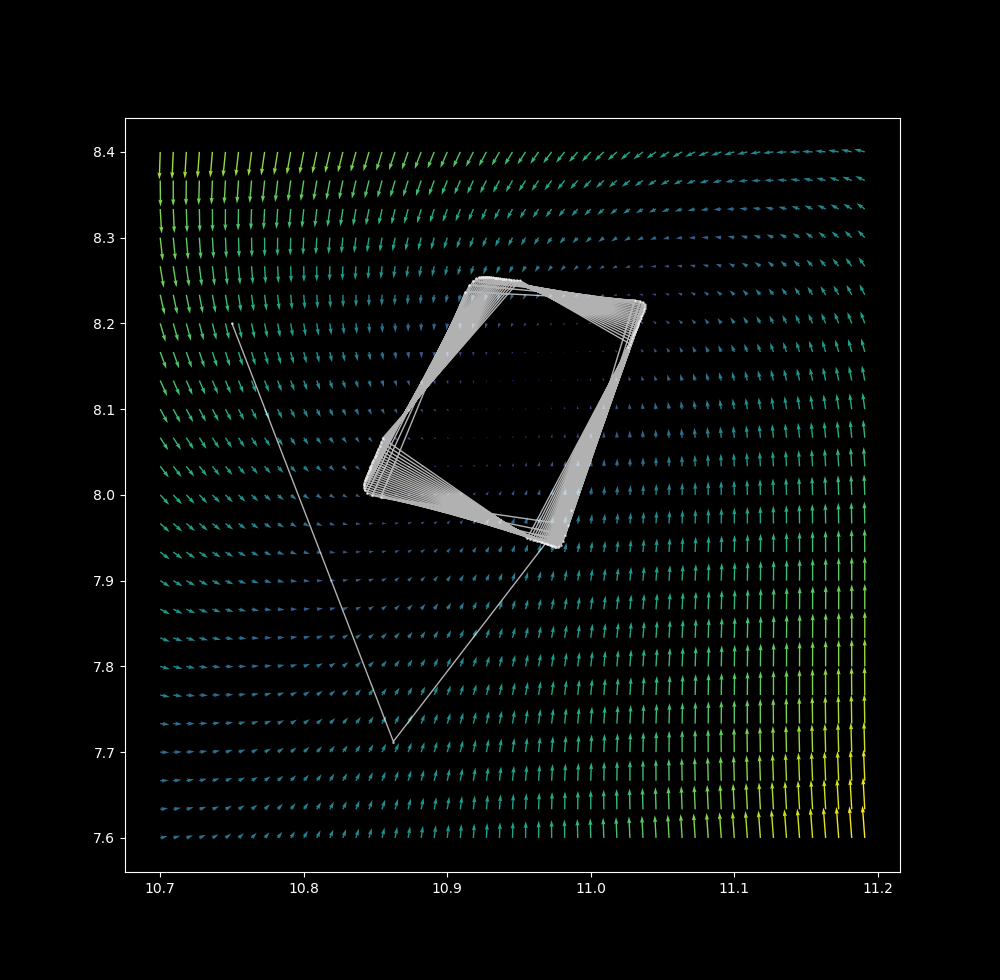 with more iterations at $\Delta t$ = 1.2, it is clear that the attractor is now 1 dimensional, and that the path is 0-dimensional. We have swapped a dimension in path for attractor! 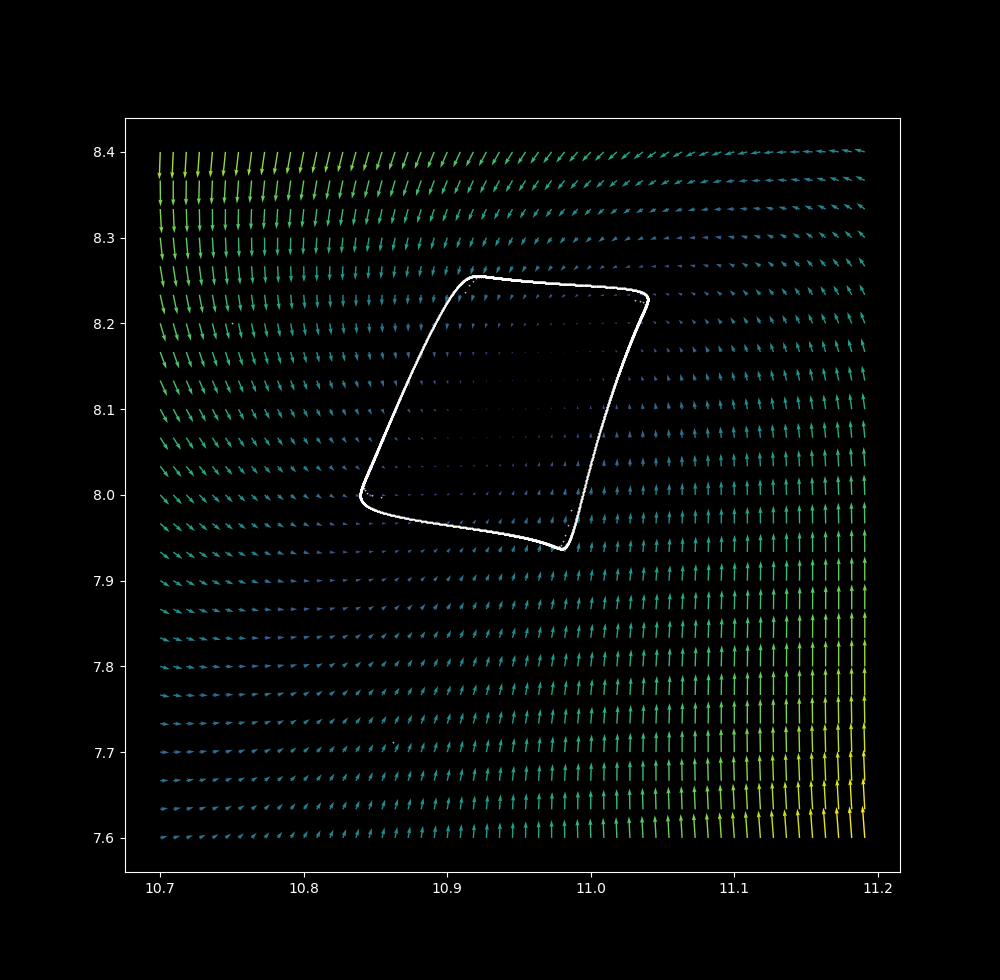 $\Delta t = 1.3$ there are now 4 point attractors, and successive iterations come closer and closer to bouncing between these points. 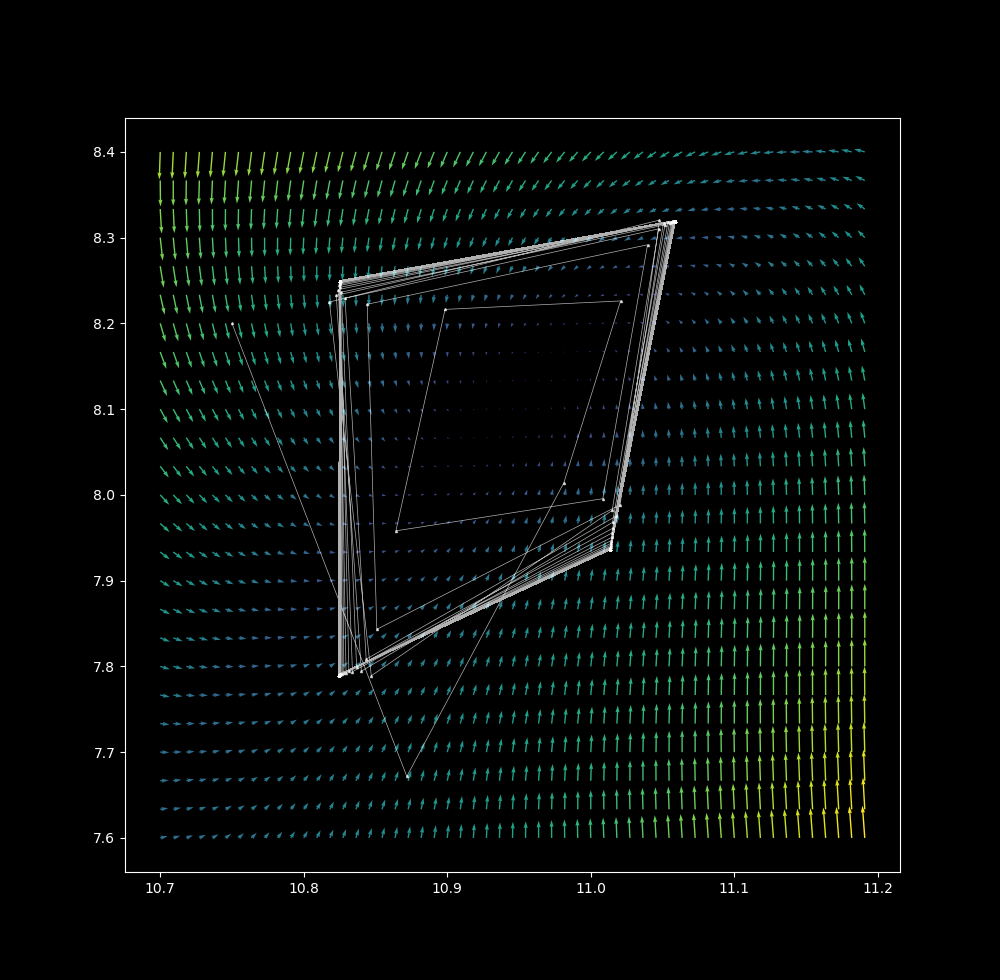 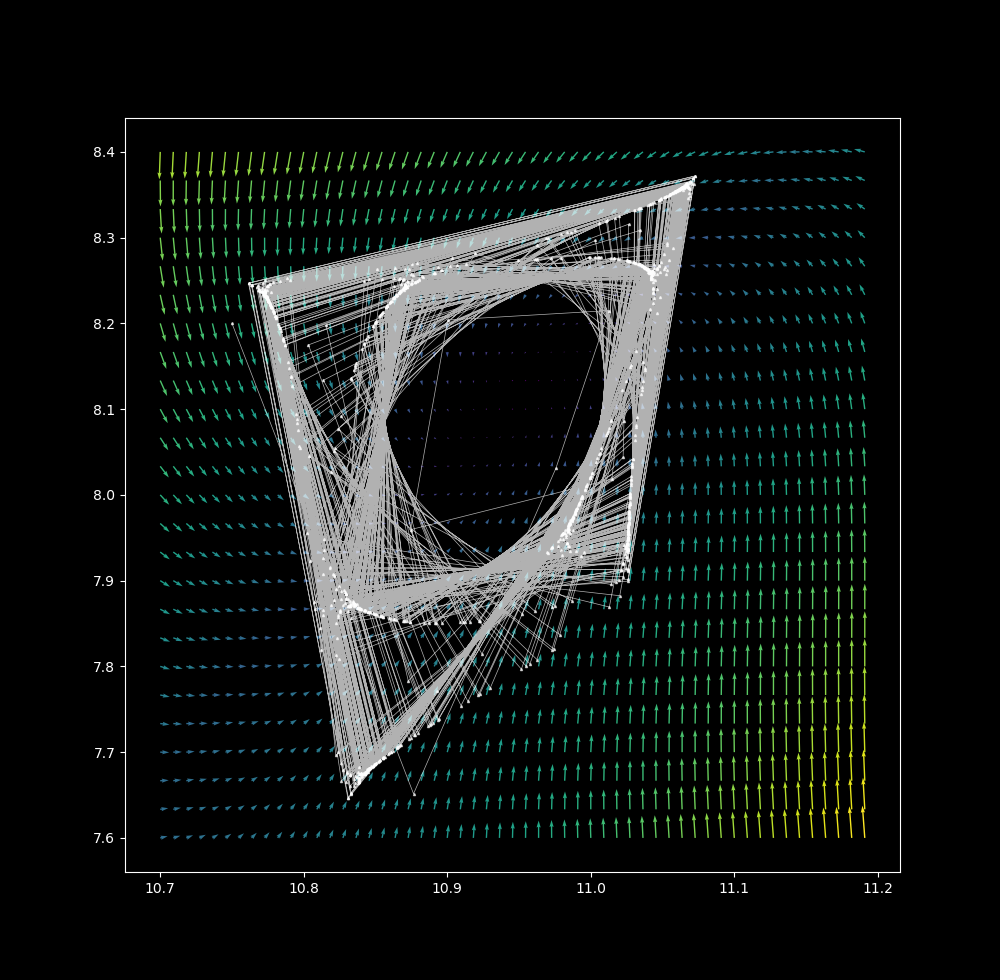 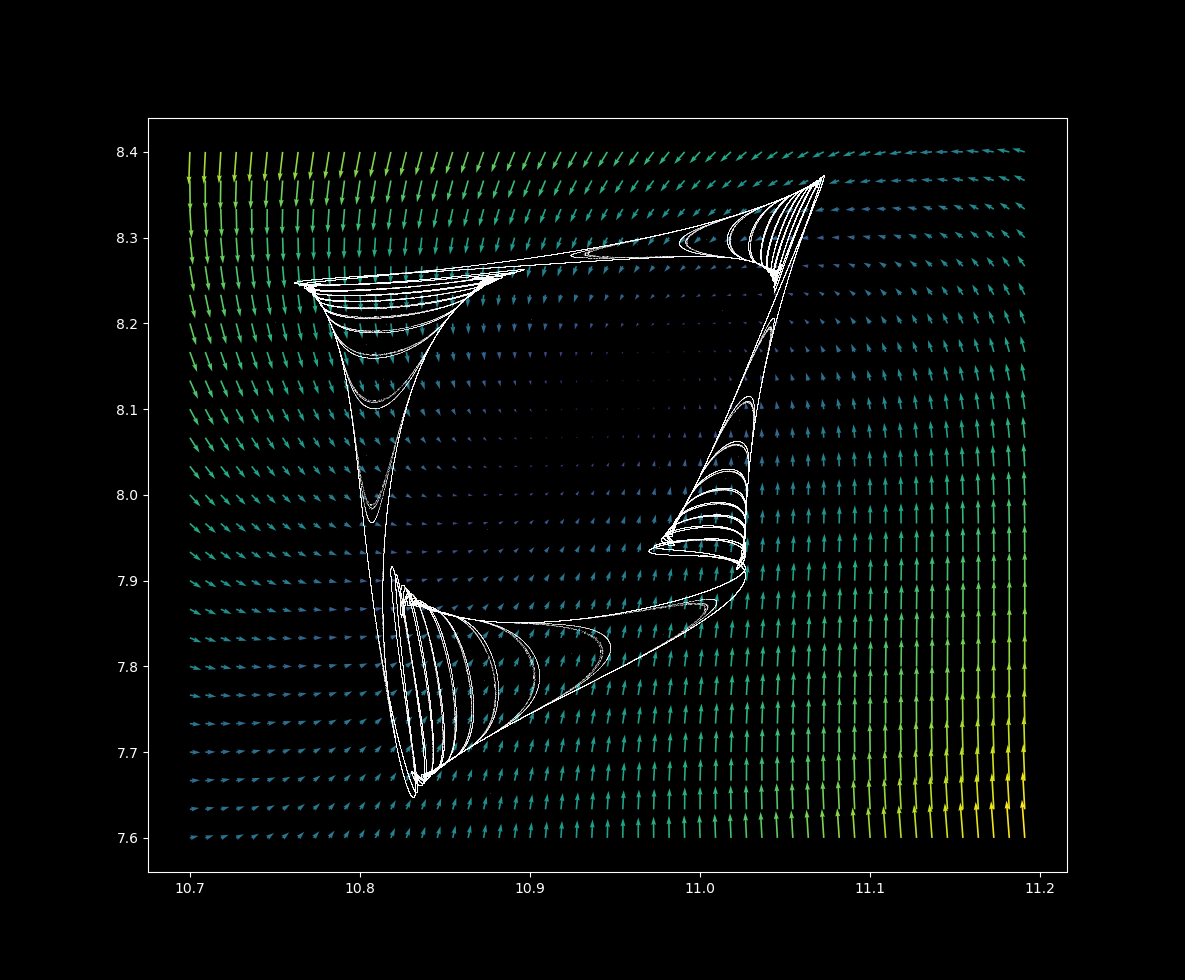 One can think of Euler maps with large $\Delta t$ values to be ‘semicontinuous’ because they represent amix between recurrence relations and (approximately) continuous maps: a point’s next position depends on both its current position as well as on the equation system’s output for that step.

Many attractors from one semi-continuous Clifford map

To generate a different Clifford attractor as defined in a discrete map, a change in the values of at least one of $a, b, c, d$ is required. But this is not the case for a semicontinuous map: merely by changing the starting $(x_0, y_0)$ coordinate, many (possibly infinitely many) attractors are possible.

For an investigation into which point ends up where, see this page.